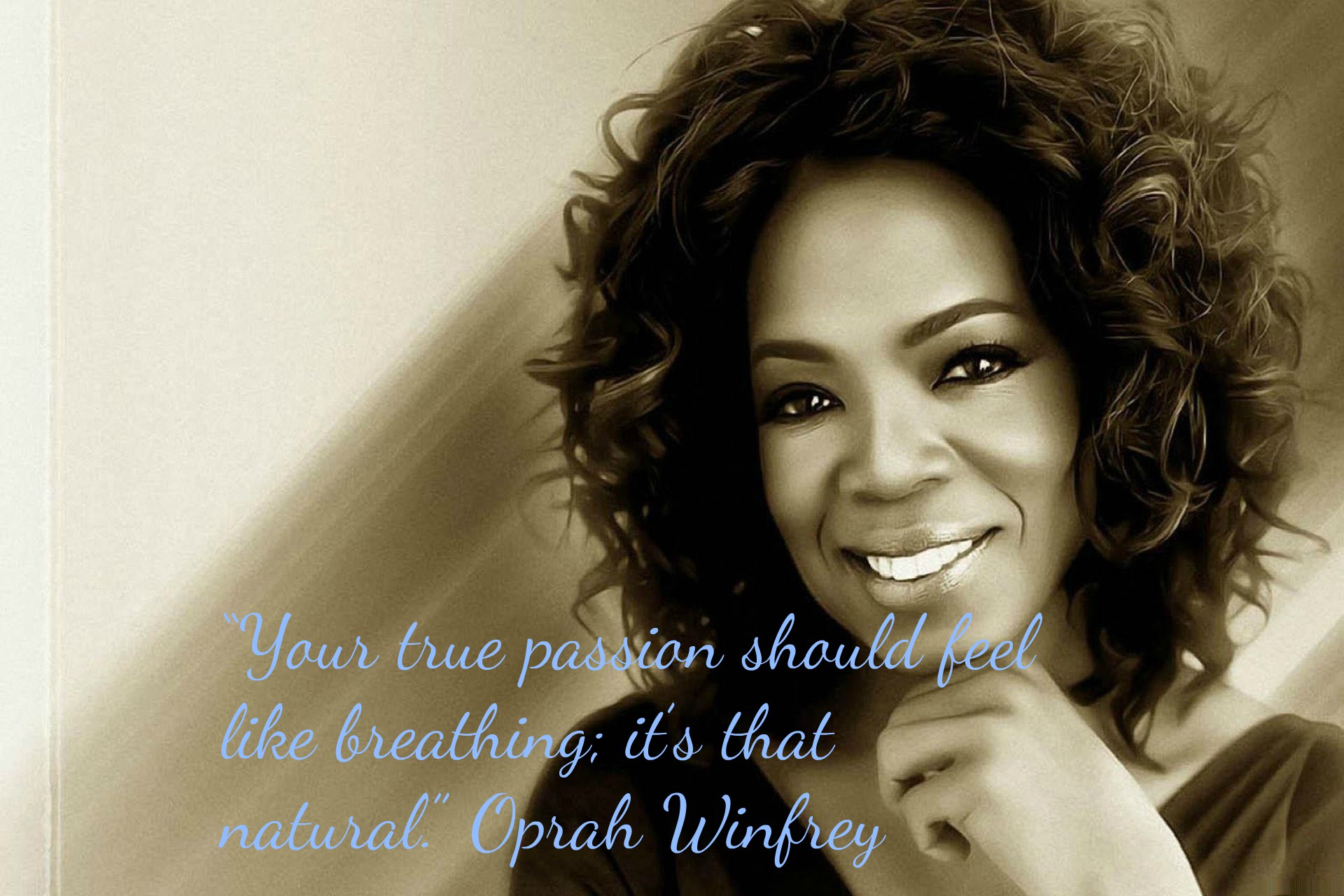 Oprah Winfrey. She is one of the most successful women in the world, TV Producer and talk show host. Oprah is the first African-American to host a national television in the United States.

She has been a great inspiration to many across the world.

You too can make if you follow your passion and work toward it. Here are some of the lessons to pick from.

“Your true passion should feel like breathing; it’s that natural.” Oprah Winfrey

“You have to know what sparks the light in you so that you, in your own way, can illuminate the world.” Oprah Winfrey

“Passion is energy. Feel the power that comes from focusing on what excites you.” Oprah Winfrey

“The truth is I have from the very beginning listened to my instincts. All of my best decisions in life have come because I was attuned to what really felt like the next right move for me.” Oprah Winfrey

Define your own destiny

“Often we don’t even realize who we’re meant to be because we’re so busy trying to live out someone else’s ideas. But other people and their opinions hold no power in defining our destiny.” Oprah Winfrey

“With every experience, you alone are painting your own canvas, thought by thought, choice by choice.” Oprah Winfrey

Be responsible for your own life

“The greatest discovery of all time is that a person can change their future by merely changing their attitude.” Oprah Winfrey

Always be grateful for what you have

“Be thankful for what you have; you’ll end up having more. If you concentrate on what you don’t have, you will never have enough.” Oprah Winfrey

Fail and learn from it

“Do the one thing you think you cannot do. Fail at it. Try again. Do better the second time. The only people who never tumble are those who never mount the high wire. This is your moment. Own it.” Oprah Winfrey

Find what your calling is

“Everybody has a calling. And your real job in life is to figure out as soon as possible what that is, who you were meant to be, and to begin to honor that in the best way possible for yourself.”

“I’ve come to believe that each of us has a personal calling that’s as unique as a fingerprint – and that the best way to succeed is to discover what you love and then find a way to offer it to others in the form of service, working hard, and also allowing the energy of the universe to lead you. ”

“The big secret in life is that there is no big secret. Whatever your goal, you can get there if you’re willing to work.”

Define your own World

“Self-esteem comes from being able to define the world in your own terms and refusing to abide by the judgments of others.”

“A true sign of confidence is when you are able to break away from the crowd, regardless of what others say or think”.

Don’t just focus on success, focus on the significance

“The key to realizing a dream is to focus not on success but on significance–and then even the small steps and little victories along your path will take on greater meaning.”

“Real integrity is doing the right thing, knowing that nobody’s going to know whether you did it or not.”

Associate yourself with the right people

“Surround yourself with only people who are going to lift you higher.” – Oprah Winfrey

Don’t judge your destiny with your current situation. If it is possible for some, it is also possible for you.

There are so many other people in the world who want the same thing as you. They are not sleeping to achieve it. So you cannot afford to have excuses not to give it all. We don’t get what we want; we get what we have to have.

Leave a comment below with your best lessons from Pro. Wangari Mathai.

Go ahead and do it. Make it work now. Create your life.